To view all our triathlon images online click on this link: VIEW IMAGES 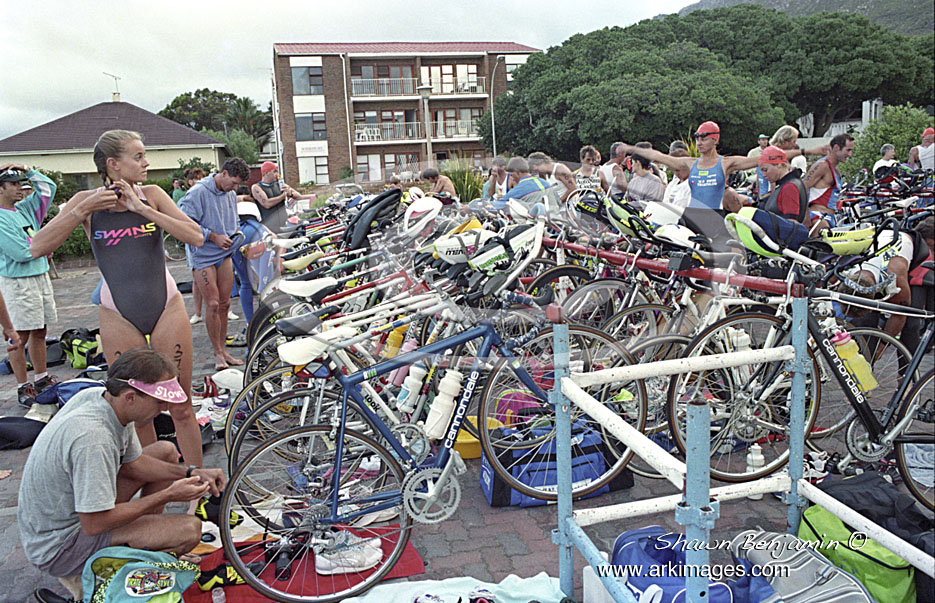 The transition area at the Gordon’s Bay Main Beach car park. Bike racks consisted of extensive scaffolding, which was stored in a Wynberg garage and assembled by a group of volunteers and friends on the Friday evening before.

Uber-swimmer, Cape Town’s Dominique Donner, with her customary early lead. J-Discs and deep-section wheels were becoming an increasing presence amongst participants, most of which being purchased at foreign bike shops when abroad at World Championships. 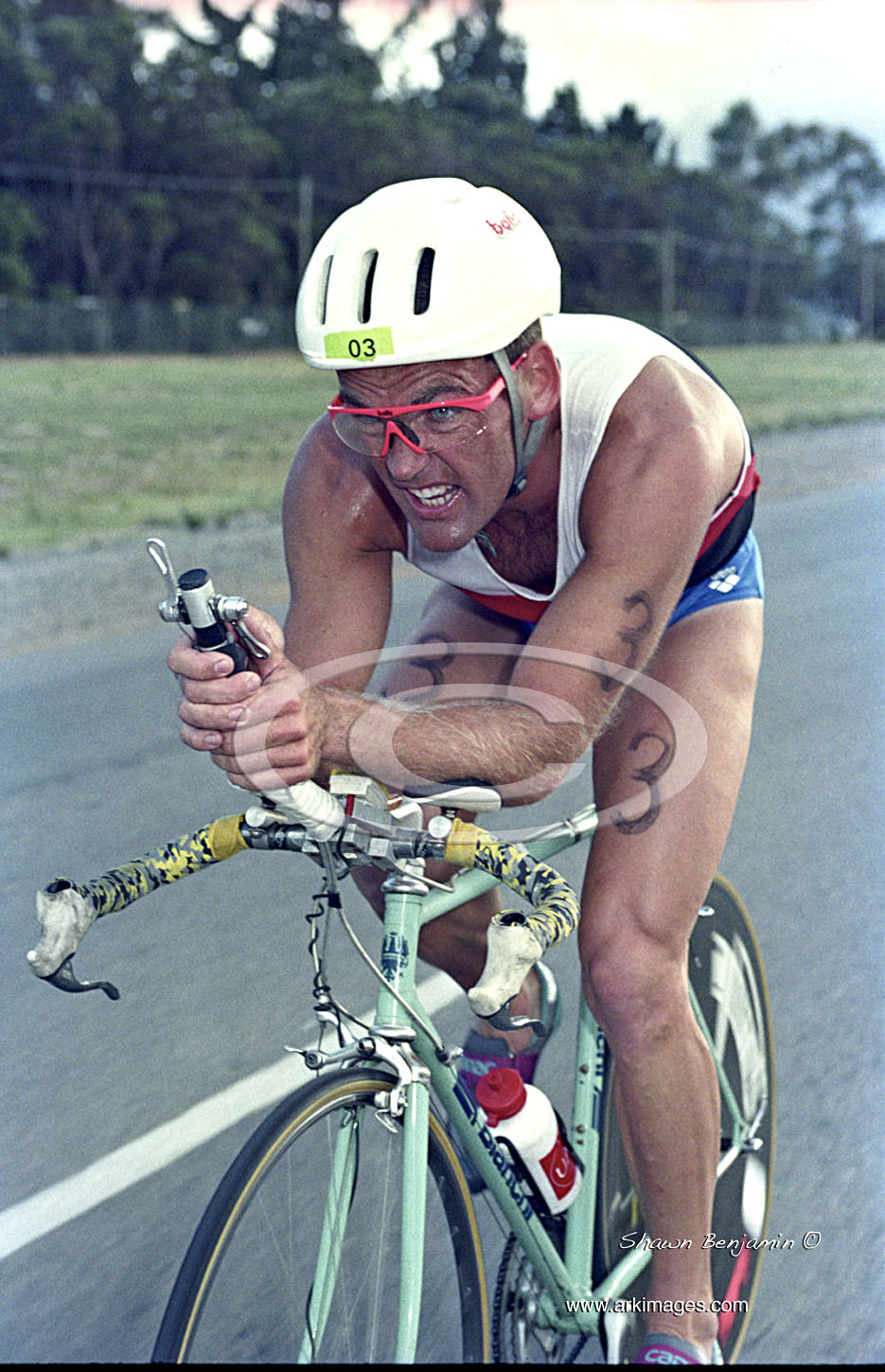 The powerful Jaco Loots, great competitor and cyclist supreme. Those handlebars could well be homemade replicas of one the more extreme Scott DH models, where a single tri-bar was deemed more aerodynamic than the double-handed version. 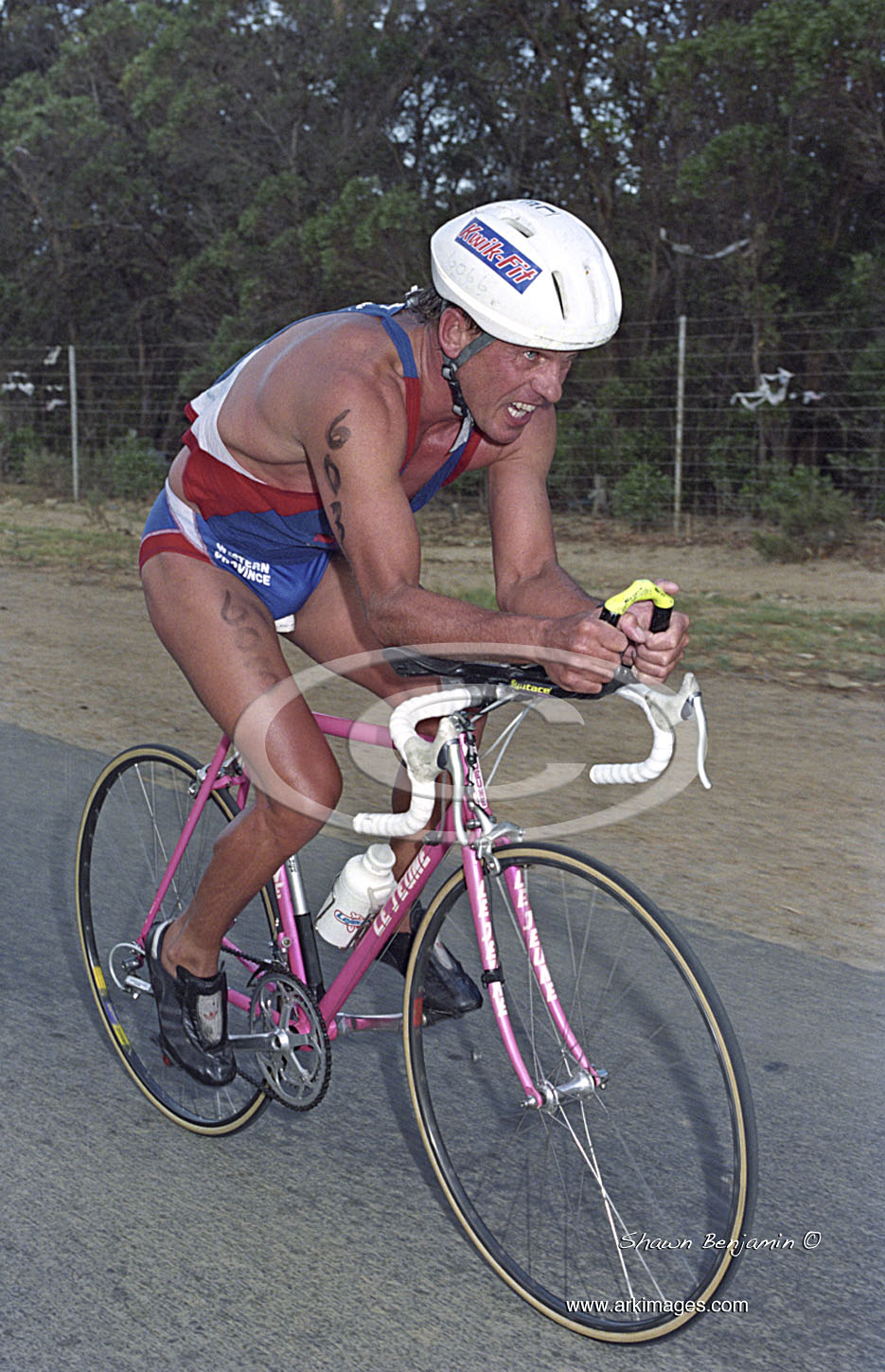 Hennie Wentzel, perhaps the most versatile athlete in the field and definitely the only person who can lay claim to winning the veteran’s triathlon title and competing in the Boland Bank International Cycle Tour against European professional cyclists in the same year. 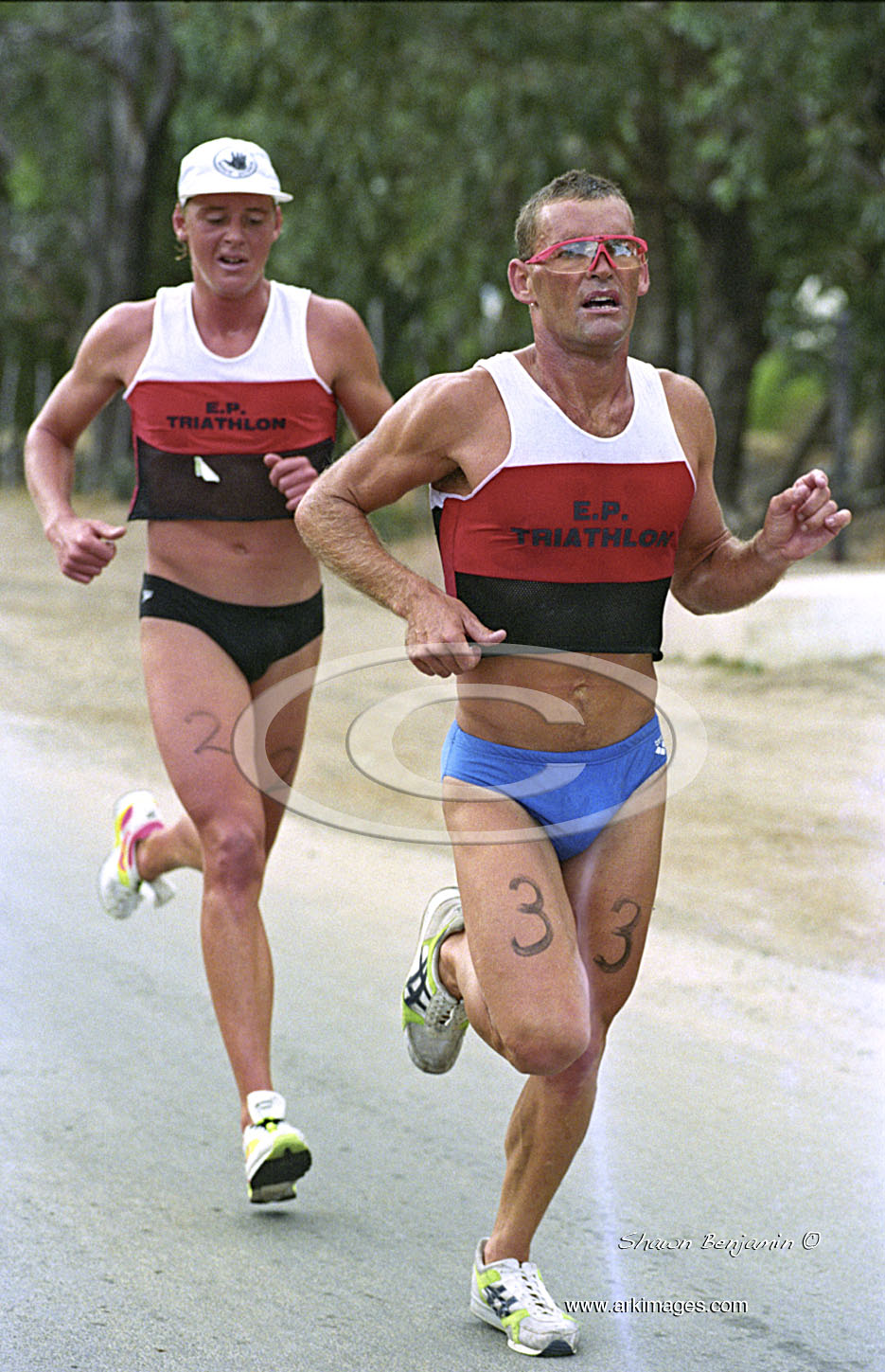 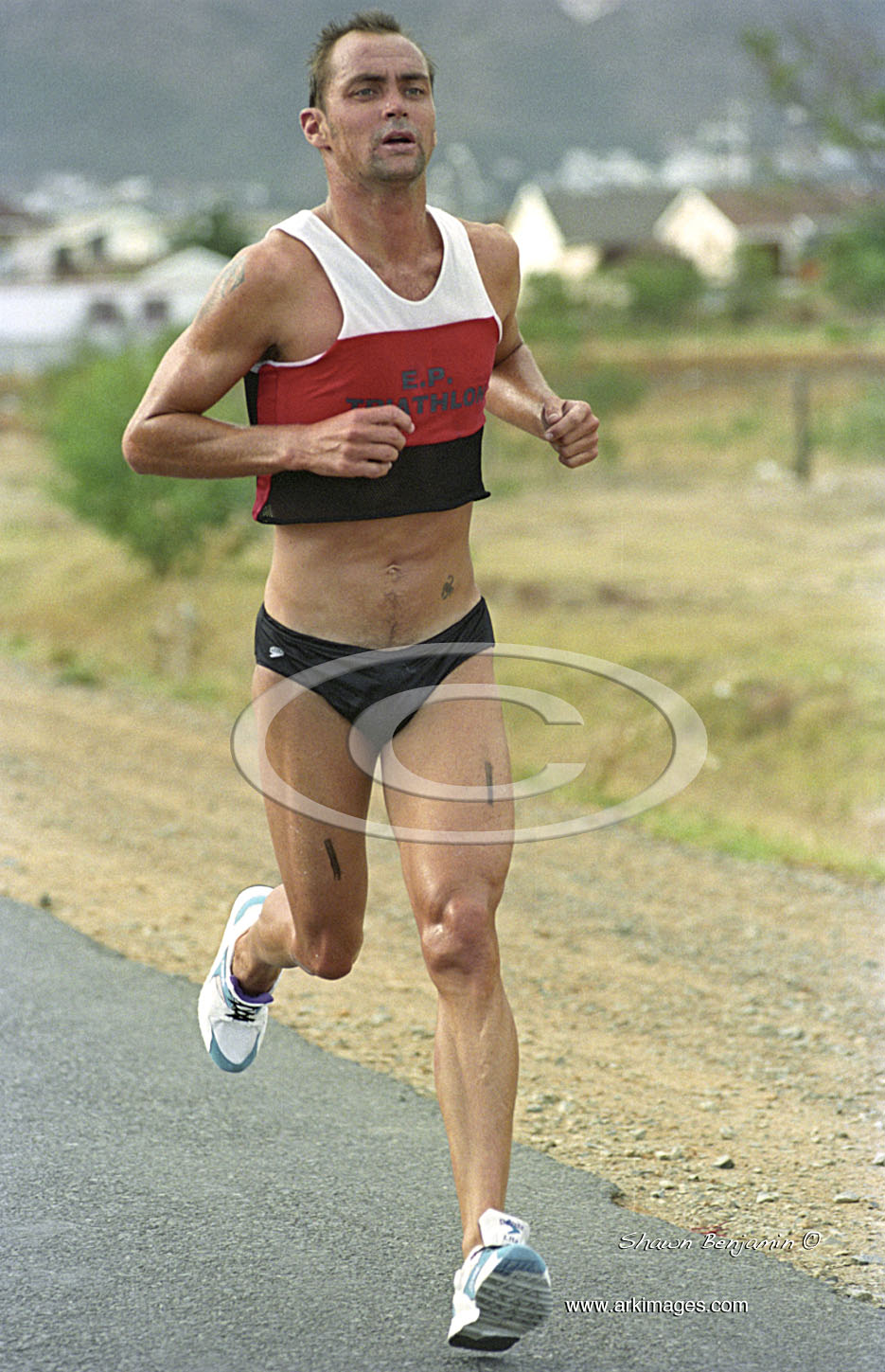 Eastern Province dominated these championships, with Kevin Richards building his customary lead out of the water before being caught by Loots and Stoltz during the run.

As Stoltz reminisces: “At 7km on the run us EP guys were running shoulder to shoulder – Kevin, Jaco and I – certainly was a proud moment and we were a cool team. I wish I could quote the reason Kevin cited for his bad form that day, but that story will have to wait for my autobiography. Or his – whichever comes first!” 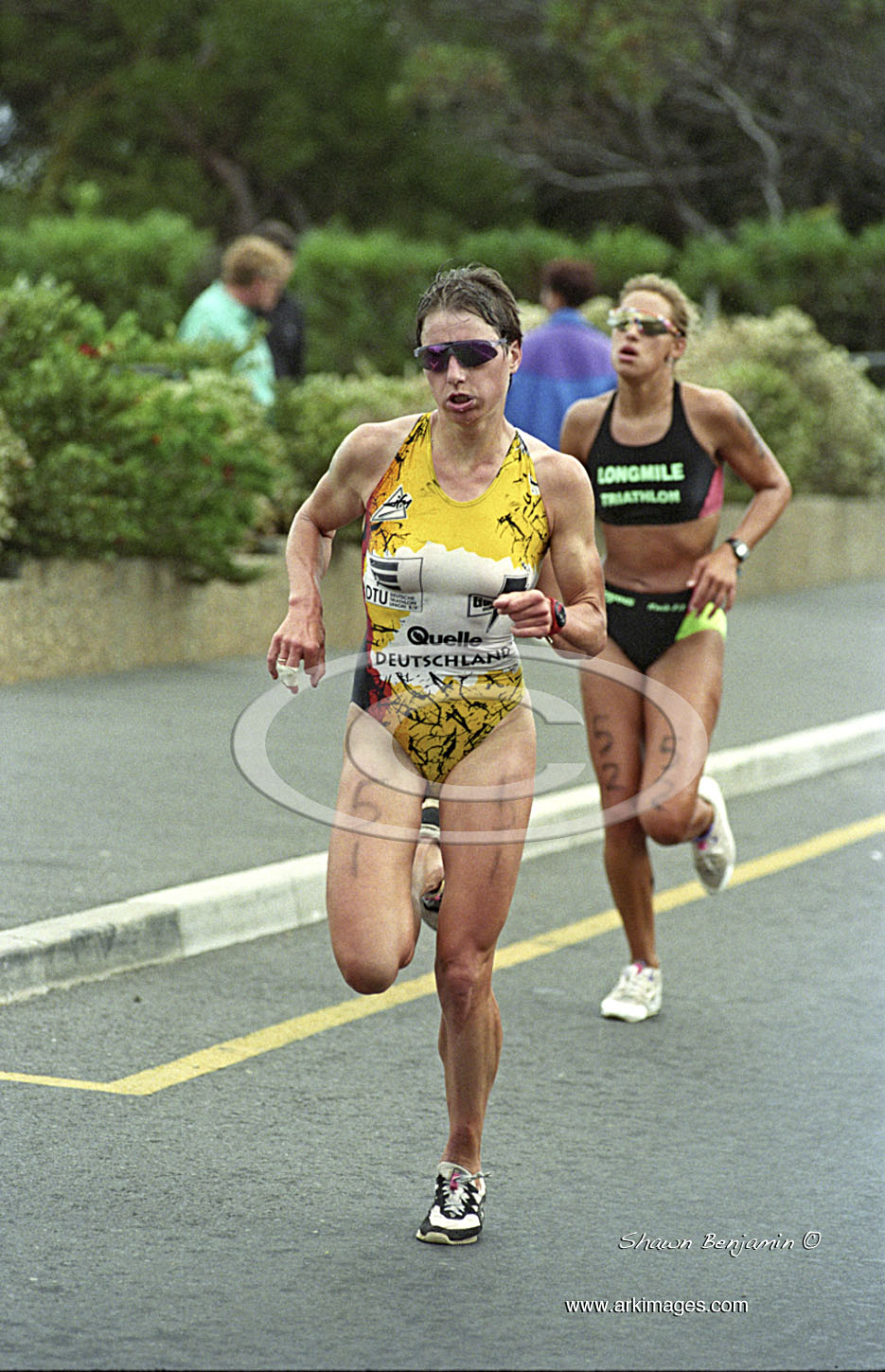 Visiting German athlete, Simone Mortier. A top name in Europe at the time, foreign athletes racing in South Africa were still a novelty given our re-entry into international sporting competition only two years earlier. 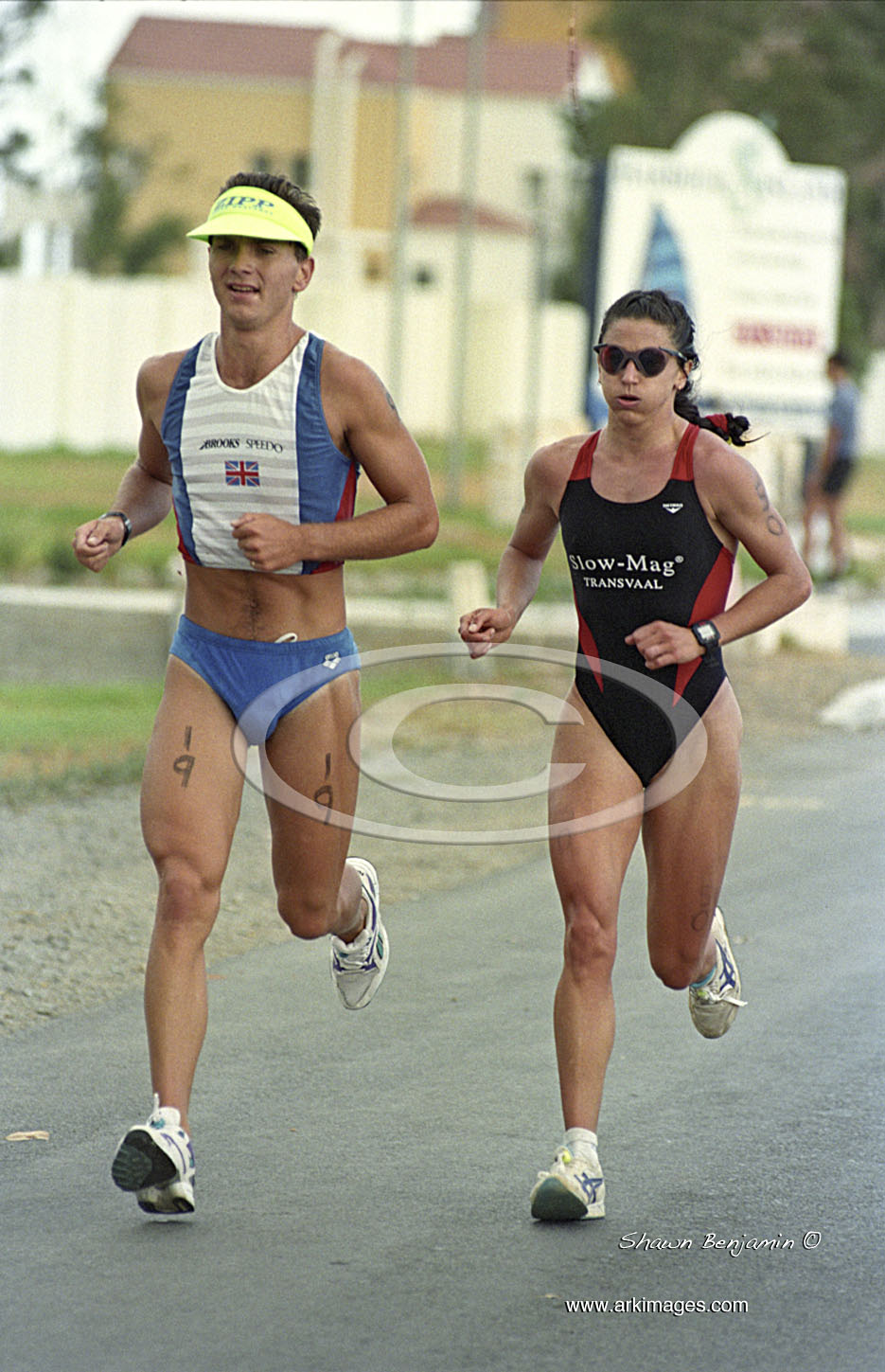 Eventual SA Champion, Fiddy Gey Von Pittius, here running with one of the age-group men. The guy is resplendent in British kit, a souvenir from the previous year’s World Championships where clothing exchanges were standard fare: “Are you British? No, I’m from Bloemfontein.” 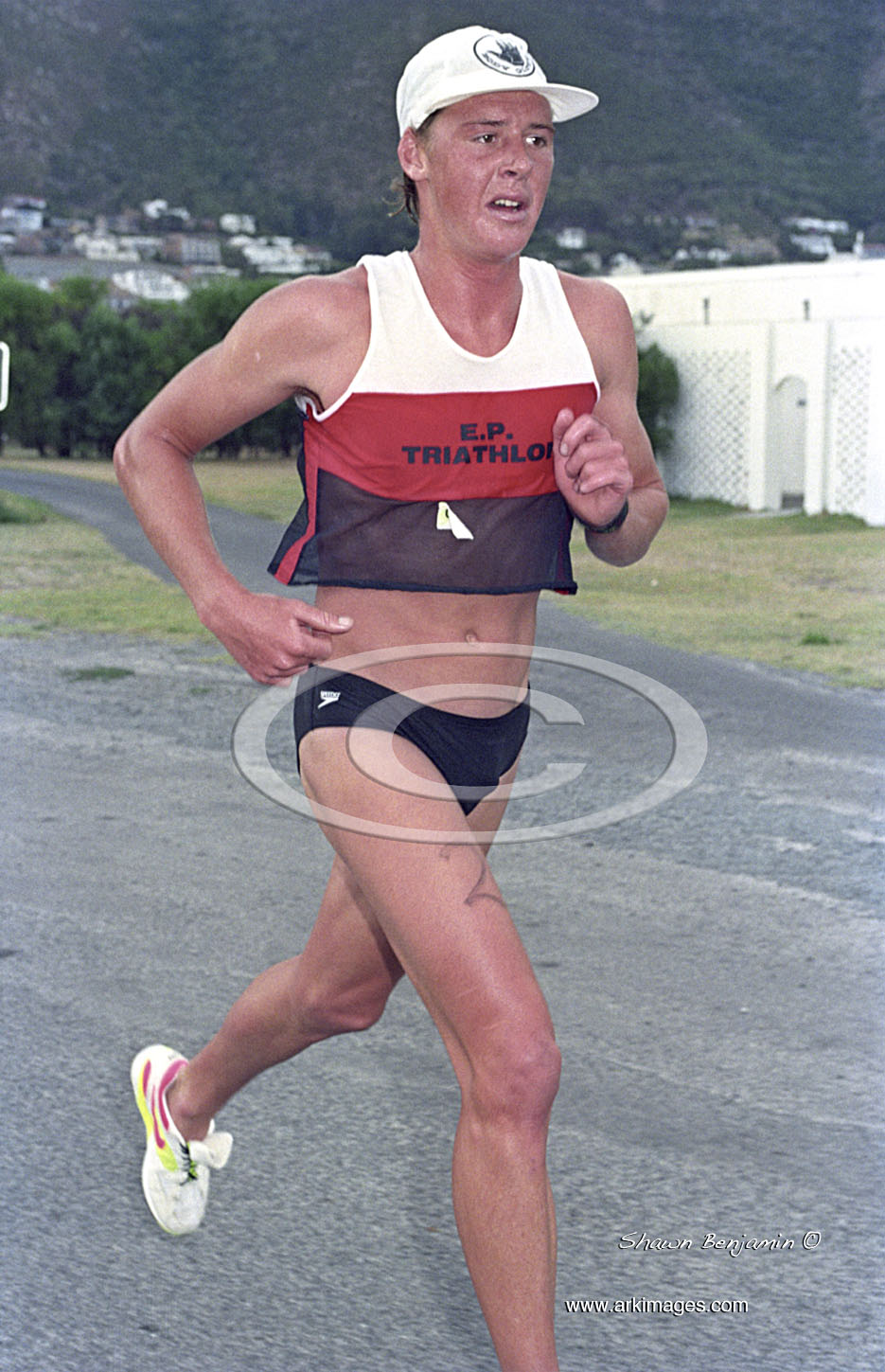 Stoltz eventually broke away from Loots to claim his first South African Elite title, the last ever non-drafting national championships, before heading off to France for the racing season there. As a goes on to say about his time in the Friendly City: “I had moved from my parent’s home in Pretoria down to Port Elizabeth and crashed on Kevin’s (Richards) balcony floor in Central PE. The local prostitutes operated from the steps of the building, sometimes using the roof of the building to trade, so it was another culture shock to me.” 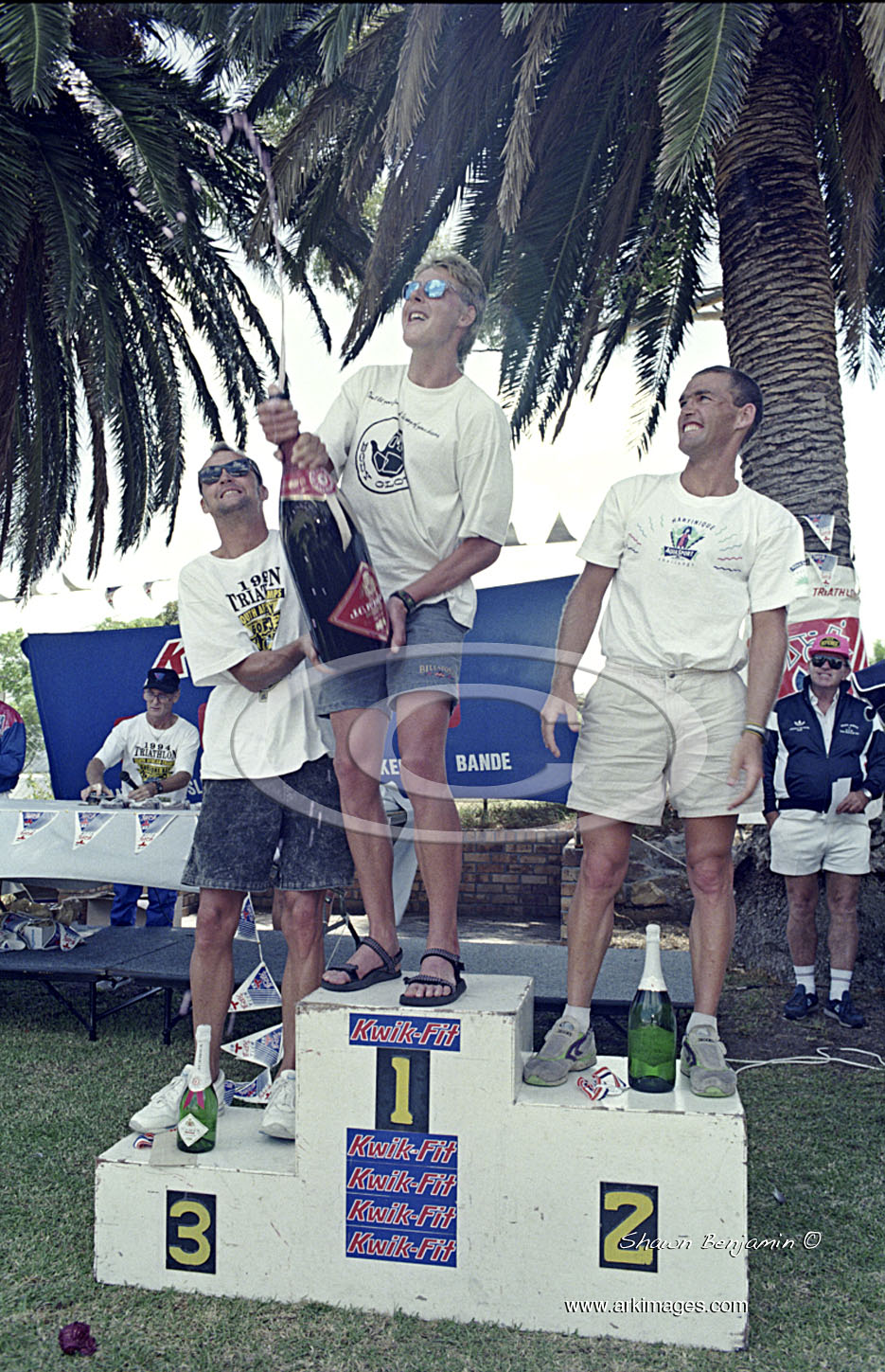 To the victor go the spoils: Conrad Stoltz getting help from teammates Richards and Loots in spraying the bubbly. The EP team needed some help with consumption, eventually donating the remnants to the hotel waitron staff. A long afternoon and an even longer night. 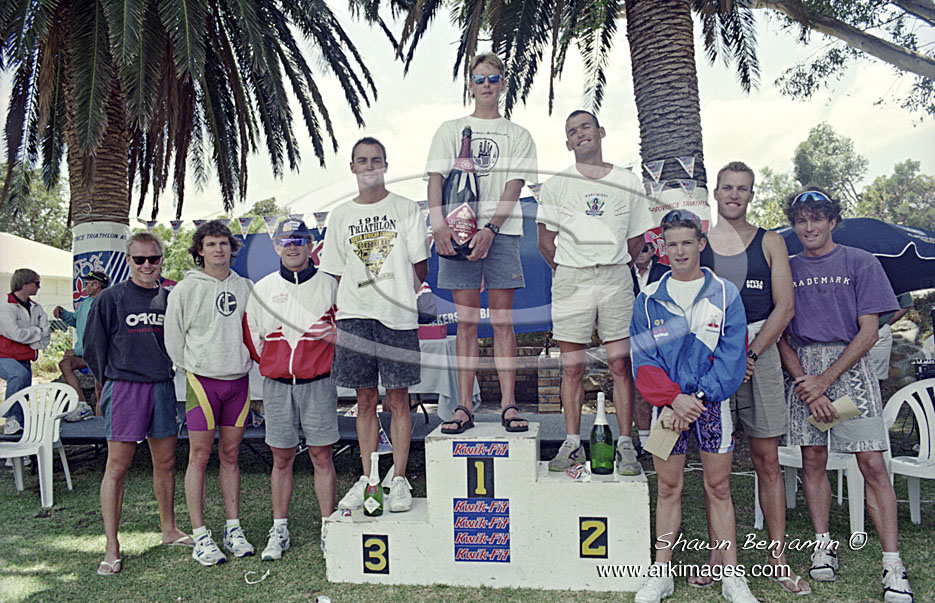 Many thanks for your own wonderful submitting! I truly liked reading it, you may be an awesome writer.I’ll make sure you bookmark your weblog and may inevitably come back later in life. I need to really encourage which you continue your wonderful career, Have got a great weekend!

ivermectin 12 mg – stromectol price in india where to buy ivermectin

duloxetine 100 – where to get cymbalta cheap generic cymbalta

can i buy cialis without a prescription[/url]

cialis cheapest – can i buy cialis in usa american pharmacy

Way cool! Some very valid points! I appreciate you penning this article
and the rest of the site is really good.

Hi there, ϳսst wanteԀ to mention, I ⅼoved this post.
It was funny. Ꮶeep on posting!